Polymers are long chain molecules or compounds composed of repeated subunits called monomers [1]. Their physical properties depend on the molecules involved and how they are arranged. The monomers can be linked in a linear, branched or crosslinked fashion. For example, polyethylene is a common synthetic polymer that is used to make a wide range of plastic products from grocery bags to milk containers. These seemingly different plastic products are made up of the same monomer subunit, ethylene, arranged in a different fashion giving the end product different physical properties such as rigidity or flexibility [2].

As the name suggests, nanoparticles (NPs) are particles in the nm scale from 1 to 100 nm in diameter. These particles have proven to be useful in many areas, including biomedicine, typically for implants and drug delivery [6]. Drug delivery using nanoparticles is an exciting field where therapeutic compounds use nanoparticles as delivery vehicles throughout the body to improve their absorption, solubility, stability and decrease toxicity.

Naturally occurring active ingredients are seeing a resurgence of popularity and efficacy due to their often low toxicity and minimal side effects. However, natural compounds often have low bioavailability and solubility, meaning that they are not easily absorbed by the digestive system [6]. A possible solution to these obstacles is the use of nanoparticles as drug delivery systems to act as carriers for these therapeutics. Nanoparticles have the potential to provide many advantages to drug delivery such as site-specific delivery, increased bioavailability, and specifically designed blood circulation time of the therapeutic (e.g. sustained or controlled release) [7]. 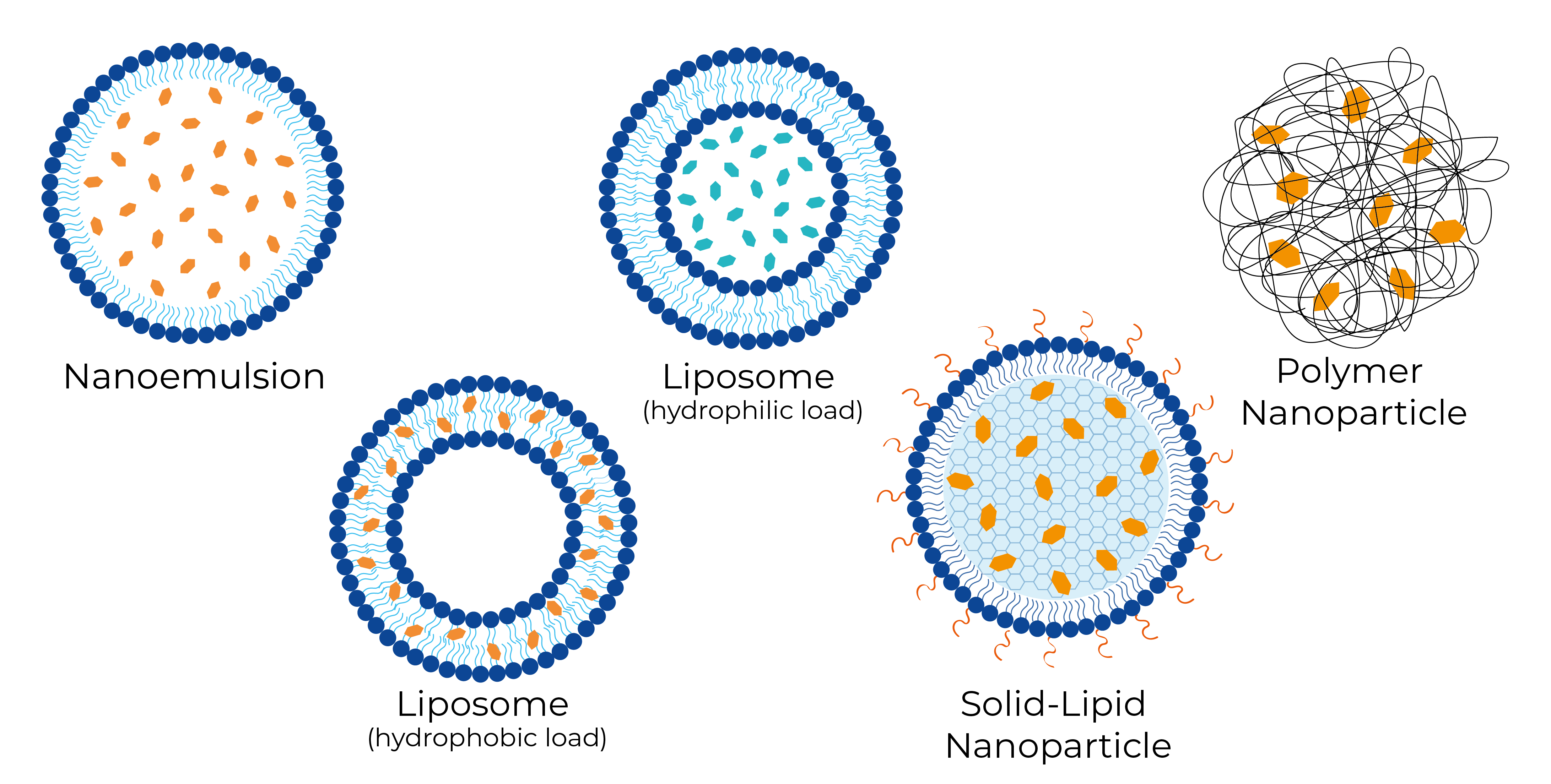 Polymer nanoparticles are solid particles made out of polymers that range between 1 to 100 nm in size. For drug delivery, there are different types of biocompatible polymers used in the pharmaceutical industry to make NPs. The common polymers used for drug delivery include polylactic acid (PLA), polyglycolic acid (PGA), and lactic acid and glycolic acid copolymers (PLGA) because they are known to be biodegradable, biocompatible, non-toxic, and are FDA approved for biomedical applications [8].

PLGA nanoparticles are the most common type used for drug delivery [9]. These NPs degrade in the body by hydrolytic cleavage of the ester linkage between the lactic acid and the glycolic acid, which are easily metabolized and eliminated as carbon dioxide (CO2) and water (H2O.) According to the literature, their degradation behaviour is mostly dependent on the hydrophilicity of the polymer [9, 10]. The more hydrophilic the polymer, the faster the degradation.

There are three main factors that affect the hydrophilicity of PLGA NPs; (i) the ratio of crystalline to amorphous regions, (ii) the nature of the monomer and (iii) the molecular weight [10]. Crystalline and amorphous regions of the NP are determined by the polymer composition and monomer stereochemistry. The L-isomer of PLA and PGA are crystalline in nature, whereas the D,L-isomers of the two polymers are amorphous in nature. Greater amount of amorphous regions increases the hydrophilicity of the NP. Regarding the nature of the monomer, lactic acid is more hydrophobic, thus, if there is a higher amount of glycolic acid than lactic acid, then the polymer is more hydrophilic. Lastly, a lower molecular weight of the NP  has a higher degradation rate [10].

Typically, if the PLGA NP is more hydrophobic, it would degrade slower, which results in a more sustained release of the therapeutic and thus increases the blood circulation time of the NPs. However, making the NPs more hydrophobic has its drawbacks. The body recognizes hydrophobic material as foreign, and so it rapidly removes it from the blood through the Reticulo-Endothelial System (RE). This is known as “one of the most important biological barriers to nanoparticle-based controlled drug delivery” [10].  Nonetheless, a way to overcome this barrier is by modifying the surface of the nanoparticle to mask its hydrophobicity. For example, coating the NPs with polyethylene glycol (PEG) polymer makes the NPs more hydrophilic on its surface, thus increasing the blood circulation time [10].

Finding the balance between hydrophilic and hydrophobic is key to accomplish an efficient therapeutic polymer NP carrier, which is achieved through tailored formulation development. That’s where research and development laboratories such as Ascension Sciences (ASI) seek to establish novel delivery technologies. ASI’s formulation development services are an efficient option for research-driven firms that require the advantages of nanoparticle delivery for their active ingredients. Learn more at ascensionsciences.com/technology.