In the broadest sense, a nanoparticle is an ultrafine unit or object with dimensions measured in nanometres (nm; 1 nm = 10−9 metre). Nanoparticles exist in the natural world and are also created as a result of human activities. Because of their submicroscopic size, they have unique material characteristics, and manufactured nanoparticles may find practical applications in a variety of areas, including medicine, engineering, catalysis, and environmental remediation.

In medicine, nanoparticles are used for drug delivery as carrier vehicles for their payloads. They are meant to protect their contents in order to reach the right destination, at the right time and in a safe manner. Carrier molecules are called excipients and the drug is often called the active pharmaceutical ingredient (API). Excipients are chosen and assembled to give specific properties to the particle such as timed release of the drug or targeted delivery to chosen tissue or cell types. Furthermore, nanoparticles can provide protection to their APIs that might be sensitive to degradation due to the action of light, exposure to acidic or basic pH, temperature or oxidation over time.

Although nanoparticles are often used to reduce the API toxicity, and excipients are considered safe, their pharmacodynamic effects should not be overlooked. Here we want to take a closer look at several common excipients used for nanoparticle preparation, especially their biocompatibility and biodegradability.

Emulsion is a mixture of two or more liquids that are normally immiscible (unmixable or unblendable); dispersions of oil in water (o/w) or water in oil (w/o). Nanoemulsion is a thermodynamically unstable transparent or translucent nanosized emulsion stabilized by surfactants having the droplet size 10–100 nm. ‘Thermodynamically unstable’ refers to the fact that liquids in the mixture will become separated eventually.

Surfactants are usually organic compounds that are amphiphilic, meaning they contain both hydrophobic groups (oil-soluble) and hydrophilic groups (water-soluble).

Sorbitan derivatives are non-ionic surfactants. They are considered non-toxic; probable oral lethal dose (human) is above 15 g/kg and they have never shown carcinogenic activity.1 Sorbitan derivatives are widely used in cosmetics, food products, and oral, parenteral, and topical pharmaceutical formulations, and are generally regarded as nontoxic and non-irritant materials. However, there are reports of them causing eye, skin and respiratory tract irritation.[1]

Spans metabolize to sorbitan and the corresponding fatty acid. Those resulting metabolites would then be expected to further metabolize via fatty acid beta oxidation or carbohydrate metabolic pathways into either smaller and more polar water-soluble metabolites excretable in the urine or as carbon dioxide exhaled in the lung.

The ester link of the polysorbate molecule undergoes hydrolysis by pancreatic lipase resulting in the fatty acid moiety and the polyoxyethylene moiety. The fatty acid moiety is rapidly absorbed and oxidized followed by the following distribution: 80% as expired CO2, 12% in the carcass, 4% unabsorbed in the gastrointestinal (GI) tract, 2.5% in the urine, and 1.2% in the liver.[2] The remaining polyoxyethylene sorbitan moiety is poorly absorbed in the GI tract with approximate excretions of 90% in the feces and 8% in the urine for Polysorbate 20 and 91% in the feces, 2.1% in the urine, and 1.6% in the carcass for Polysorbate 80.[2] Dermal absorption on intact skin is not likely based on the large molecular weights of the Polysorbates. EC50 value for Tween 80 was determined as 7.0 g/L (95% confidence interval: 4.7–10.5 g/L).[3] These results permit to classify both surfactants as ‘‘practically non-toxic’’ for aquatic organisms. Overall, sorbitan-based surfactants can be classified as highly biocompatible and biodegradable.

Liposomes are artificial nanosized vesicular structures consisting of an aqueous core surrounded with at least one phospholipid layer. The liposome can be used as a vehicle for administration of nutrients and pharmaceutical drugs. 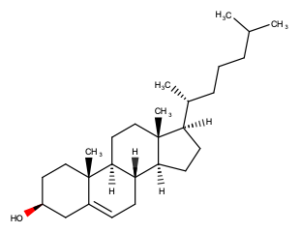 Cholesterol is a type of lipid biosynthesized by all animal cells and is an essential structural component of animal cell membranes. It is also a precursor molecule for all steroid hormones and vitamin D. It is an important component of our cell membranes. Cholesterol can be biosynthesized in the body or ingested with food. Ingested cholesterol is partially excreted and partially recycled in the human body. It is fully biocompatible, however, it’s wise to monitor levels of ingested cholesterol as several health conditions are associated with elevated levels of this compound.

Phospholipids are a class of lipids that are a major component of all cell membranes. The structure of the phospholipid molecule generally consists of two hydrophobic fatty acid “tails” and a hydrophilic “head” consisting of a phosphate group. The two components are usually joined by a glycerol molecule. The phosphate groups can be modified with simple organic molecules such as choline, ethanolamine or serine. Phospholipids are biocompatible and metabolized in the human body.

PEGylated lipids are usually phospholipids modified with polyethylene glycol. The PEGylation technology has been widely used to modify (bio)pharmaceuticals chemically to prolong their plasma half-life in vivo. Pegylated lipids are minor components of the liposomes, typically 3 – 5 mol %, and behave similarly to the regular phospholipids in the human body. The polyethylene glycol portion of these molecules is the most concerning one in terms of biocompatibility and safety. However, over 85% of PEG1000 and up to 96% of PEG6000 are excreted through the urine after intravenous administration within 12 hours post dose.[4] Otherwise, ethylene glycol is metabolized in the liver to a variety of compounds of increasing toxicity, such as glycoaldehyde, glycolic acid, glyoxylic acid and oxalic acid. Several factors may influence susceptibility to ethylene glycol-induced toxicity, including individual differences in levels of liver alcohol dehydrogenase activity, and nutritional deficiencies, notably lack of thiamine or pyridoxine (two vitamins that mediate the metabolic detoxification of ethylene glycol). Yet, oral lethal doses for ethylene glycol, glycoaldehyde, glycolic acid, glyoxylic acid and oxalic acid are much higher than the concentrations which can be achieved considering amounts of the PEGylated lipids in the typical liposomal compositions, which renders PEGylated lipids safe for humans at given conditions.

Solid lipid nanoparticles (SLN) are a type of lipid nanostructures comprised of surfactant-stabilised lipids that are solid at both room and body temperature, typically formulated with a single high-purity lipid as a primary carrier material. One of the common types of lipids used for SLNs manufacturing is triglycerides.

Triglycerides, derivatives of glycerol and three fatty acid residues, are the main constituents of body fat in humans and other vertebrates, as well as vegetable fat. Triglycerides are biocompatible and play an important role in metabolism as energy sources and transporters of dietary fat.

Polymer nanoparticles are colloidal particles of size range 10 nm–1 μm and solid in nature. Depending on preparation method, polymeric nanoparticles can form two types of structures: nanosphere and nanocapsule. Nanospheres consist of a matrix system in which the drug is uniformly dispersed whereas in nanocapsules the drug is embedded in a cavity and the cavity is surrounded by a polymeric membrane. 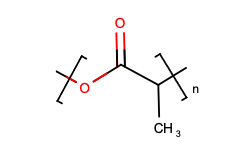 Poly(lactic acid) (PLA) and poly(lactic-co-glycolic acid) (PLGA) are among the well-documented FDA approved polymers used for the preparation of safe and effective vaccine, drug and gene delivery systems. PLA and PLGA are biocompatible and biodegradable. The biocompatibility of PLA and PLGA was tested and demonstrated both in vitro and in vivo.[5]

PLA and PLGA are biodegradable under industrial composting conditions, starting with chemical hydrolysis process, followed by the microbial digestion, to ultimately degrade the polymers.

Common nanoparticle excipients are biocompatible and safe for humans, adverse reactions are extremely rare or not reported. In some cases, the elimination of degradation by-products fails, and abnormal biological responses can be observed. Therefore, potential side effects of the excipients should not be overlooked even for the well described compounds.