Phytocannabinoids are chemical compounds found in the cannabis plant which have been increasingly used as  therapeutics in recent years [1]. They have shown to aid in chronic pain management for several diseases such as rheumatoid arthritis, ameliorate the side effects of chemotherapy, and relieve inflammation among other therapeutic benefits.

However, cannabinoids possess low oral bioavailability given their hydrophobic nature [2]. Thus, special formulations are needed to ensure these bioactive compounds get absorbed by the digestive system to produce the desired effect. An effective way to increase the bioavailability of cannabinoids is by encapsulating them into nanoparticles [3]. Lipid nanoparticles are effective vehicles for hydrophobic bioactive compounds [4] and show strong potential for cannabinoid delivery. They are composed of a phospholipid bilayer and a hydrophilic core as shown in Figure 1. 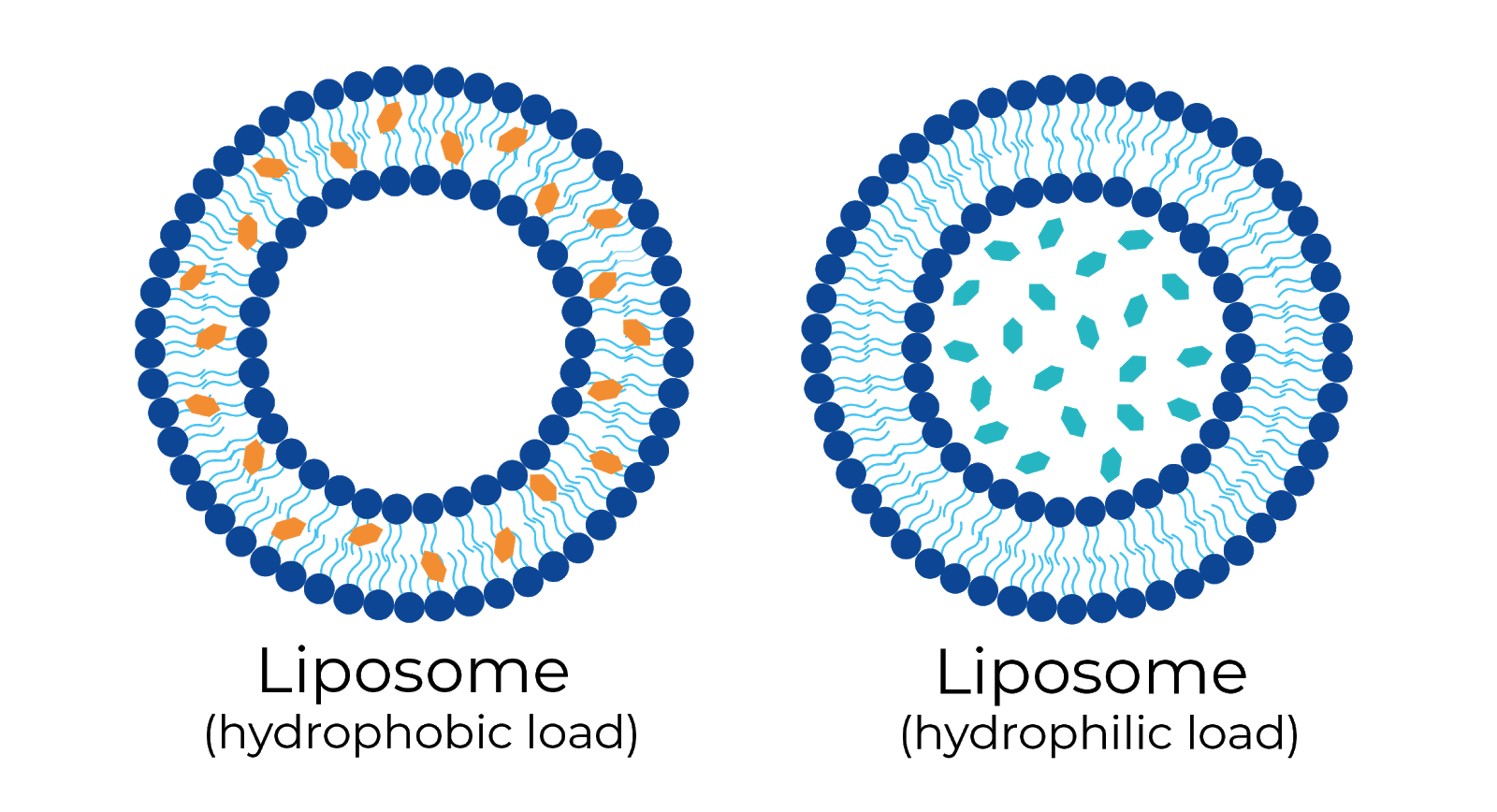 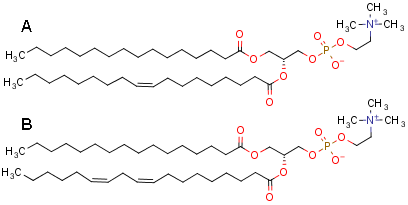 Additionally, we assessed the effect of concentration on liposome stability. Formulations were concentrated by centrifugal filtration, and their stability was monitored for  35 days at 4°C.

Corresponding phospholipid, cholesterol and PEGylated lipid were dissolved in absolute ethanol at proprietary ratios. Calcium- (Ca2+) and magnesium- (Mg2+) free PBS buffer at pH=7.4 was used as the aqueous phase. The organic and aqueous phases were rapidly mixed using the NanoAssemblr Benchtop microfluidic instrument to form unilamellar liposomes. THC was loaded in situ by dissolving it in the lipid solution. Formulations were then dialyzed against PBS for ethanol removal

An aliquot of each formulation was concentrated after dialysis to approximately 10X using Amicon® Ultra-4 Centrifugal Filter Unit (purchased from Sigma Aldrich).

The stability of the liposomes was assessed by measuring the size and PDI (polydispersity index) using a Dynamic Light Scattering (DLS) system (Zetasizer, Malvern Instruments, UK). Samples were stored at 4°C and analyzed once a week for five weeks. Size and polydispersity index (PDI) were represented as the mean of three samples, error bars representing standard deviation of the mean. The liposome encapsulation efficiency (EE%) was determined by HPLC (high-performance liquid chromatography).

Liposomes with the different phospholipids were prepared with identical instrument parameters and API loads. The cholesterol amount was higher in the POPC-based formulation than in the SoyPC-based one, following what we have found to be the most optimal parameters for the two phospholipids.

First, the unconcentrated liposome formulations were compared. The SoyPC-based liposomes showed slightly less variation in size and PDI over the 35 days of storage than the POPC-based liposomes (Figure 3). The POPC formulation particle size decreased after dialysis (Day 1) and then gradually increased. The PDI also decreased after dialysis, increased over the next two weeks of storage and then stabilized at 0.15 ± 0.01. Overall, both formulations demonstrated stability over 5 weeks of storage at 4°C. SoyPC-based liposomes had slightly higher particle size and PDI compared to the POPC-based, however not exceeding 100 nm in size and 0.25 in PDI, which characterizes both formulations as uniform with narrow size distribution and makes them promising candidates for cannabinoid delivery. 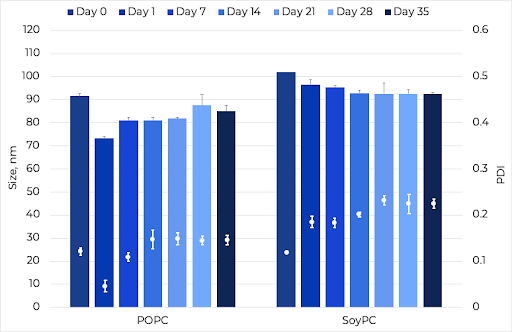 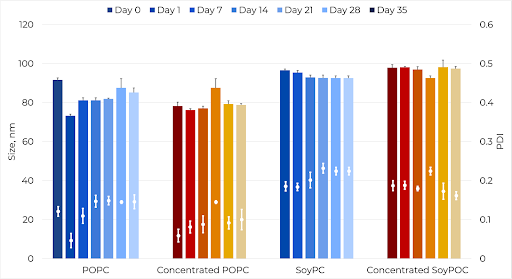 HPLC analysis of the supernatant after centrifugal filtration of the samples showed no traces of THC which proves centrifugation to be non-disruptive and suitable for concentrating liposomes. Corresponding concentration  coefficients of 12.2 for SoyPC-based  and 4.5 for POPC-based liposomes were determined based on the HPLC data. 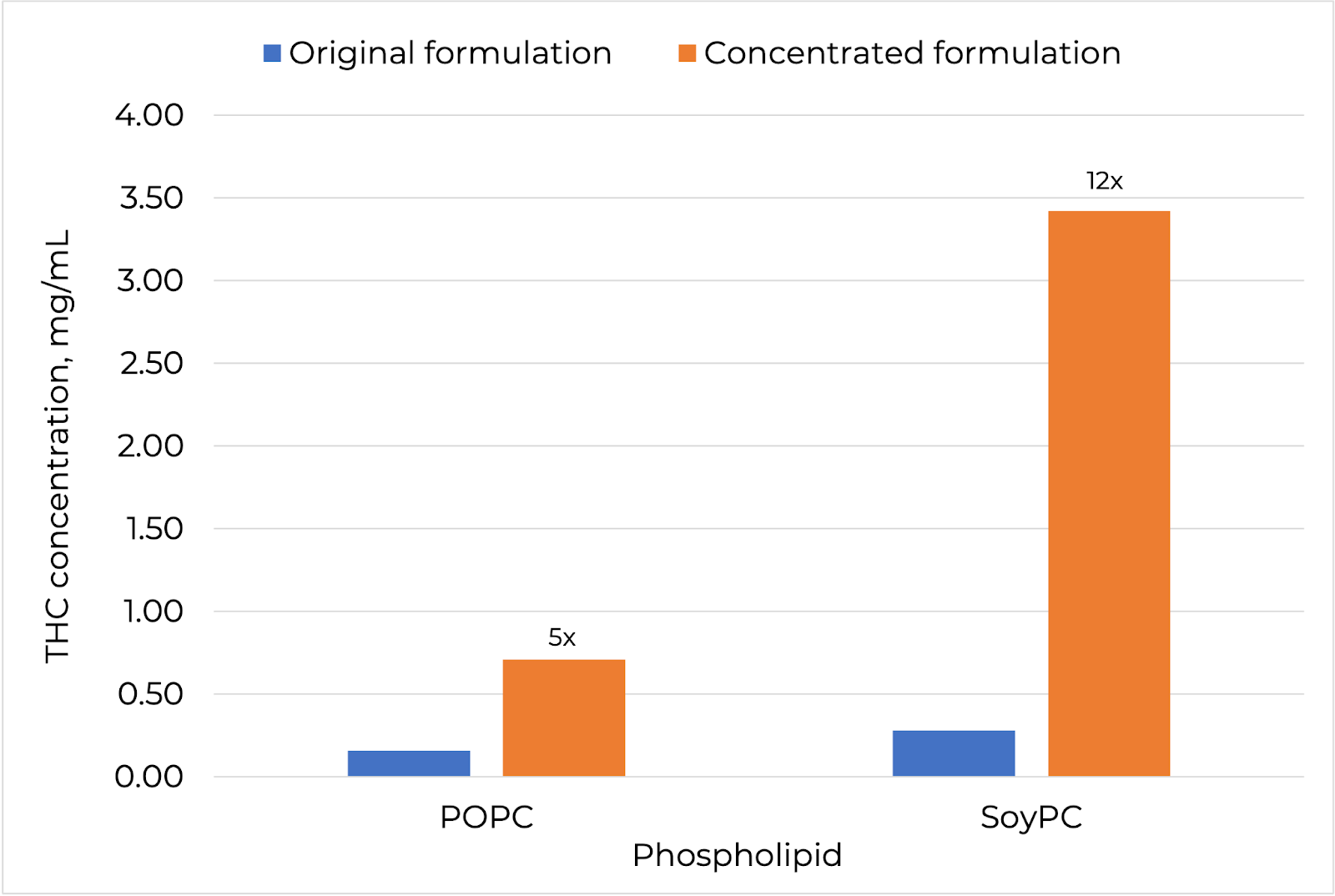 Figure 5. THC concentration before and after centrifugal filtration of formulations.

Stable liposome formulations for cannabinoid encapsulation can be prepared using  different unsaturated phospholipids as the main excipients. We have successfully produced stable formulations with comparable particle size and PDI and high encapsulation efficiency based on natural phosphatidylcholine from soybeans (SoyPC) and a synthetic lipid 1-palmitoyl-2-oleoyl-sn-glycero-3-phosphocholine  (POPC).

Liposomes can be concentrated after NanoAssemblr Benchtop production by centrifugal filtration without appreciably affecting their size and stability.

Employing nanoparticle formulation technology from the cutting edge of genetic medicine, Ascension Sciences Inc. (ASI) is developing cannabinoid nano delivery platforms and techniques for the pharma and nutraceutical industries. ASI’s R&D and formulation development services are an efficient option for research driven firms that require the advantages of nanoparticle delivery for their active ingredients.